Recently, getting a notification regarding a whale alert is nothing new or a surprise though. It has become almost an everyday event these days. In spite of this, on October 7, 100 million XRP was transferred in just 6 transactions.

According to the blockchain service, the Whale Alert, on October 7, about nearly 100 million XRP has been transferred. All these transfers are as usual anonymous.

In addition, the information received is that, all these are not from the same account or crypto wallet. Also, the transfers were between accounts of different crypto exchanges.

Moreover, the total value of the XRP transferred amounts to about $107 million approximately. On the other hand, the whale alert shows that all these XRP transfers were done through only 6 crypto transactions.

Furthermore, recently Ripple has also transferred about 20 million XRP from its own crypto wallets to the Bitstamp crypto exchange. However, just the starting of this year, this exchange banned XRP from its stables.

Besides, being banned by the exchange, again transferring XRP to it, is now a mystery. Also, it is evident that XRP was banned upon the exchange due to the U.S Securities and Exchange Commission (SEC) filing a case on Ripple for XRP.

The Bitter News for Ripple

Amidst all this, Ripple also undergoes a new trauma now. Just a few hours back it was officially announced that Moneygram and Stellar (XLM) have closed a deal with each other.

In addition, the complete project from this partnership is expected to hit roads soon by the mid of 2022.

Moreover, it’s known very well that Stellar (XLM) has been Ripple’s competitor since the beginning. Owing to the fact that Stellar was actually developed by Ripple’s former developer. 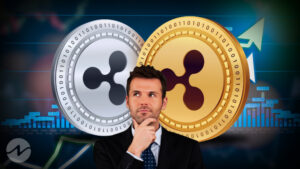 Is XRP Eyeing $2 By the End of October?