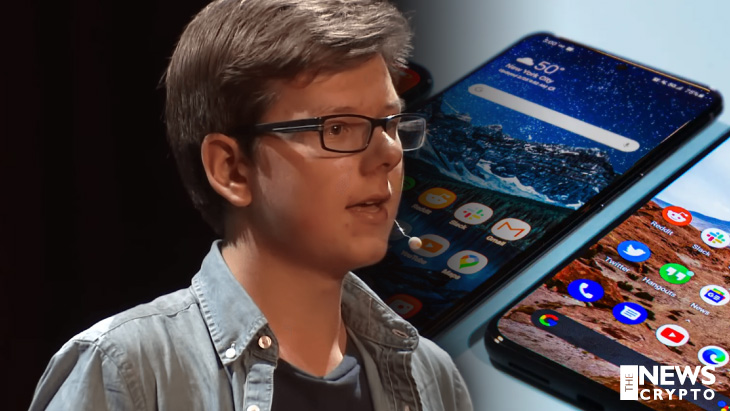 Self-professed 22-year-old Bitcoin millionaire Erik Finman has come up with his smartphone, Freedom Phone. Erik Finman caused a minor stir on one of the social media Twitter this week when he posted a video pitching a Freedom Phone, he said let people use apps for free of censorship or tracking.

This is the first major pushback on the Big Tech companies that attacked us – for just thinking different.

Accordingly, in that video which Erik Finman posted on Twitter, he describes himself a “the youngest Bitcoin millionaire”. And displays images of Abraham Lincoln and Martin Luther King to suggest they would have been redacted in the present political climate.

Moreover, according to Freedom phone’s website, Erik Finman’s discovery comes with features like tracking blockers and an uncensorable app store. People can even download and access apps that banned on the other app stores like Google Play Store and Apple’s App Store.

Furthermore, on the company’s official website Freedom Phone listed for $499.99 and will start shipping from August. Also, the company slightly revealed the features of the Freedom phone, the phone will feature a 6-inch-screen and a great camera. Also, the phone has its OS software and contains lots of storage. But the exact storage space not yet revealed.

More So, Erik Finman stated, “The Freedom Phone does everything your current phone does, except censor you and spy on you”.

Many of them stated Finman and his Freedom Phone failed to feature any manufacturer’s specifications. And some of them suggested that the Freedom Phone was an exploit aimed at suckers.

So you’re telling me a “Freedom Phone” is basically a generic Android Device, with Parler, Telegram, Rumble, OAN, Newsroom, Duck Duck Go and a VPN preloaded?
Wow. A new sucker is born every day pic.twitter.com/7dba81Kknl

The most prominent conservative performance artists like Candace Owens have been promoting the phone on social media with discount codes. Even as proof shows they are continuing to use an iPhone, and not the freedom phone as their one.