Ethereum and its Tiring Gas Fees: What Alternatives are for Games? The core objective of blockchain technology is to create a trustless environment that facilitates immutable transactions among people over the internet. Another possible blockchain usage purpose is to reduce network latency and reduce spends on clouds, but thats specific to service-oriented or game-oriented blockchain driven mesh networks

Blockchain is revolutionising the online gaming world, a paradigm shift is taking place as we speak, and the gaming world is breaking from the clutches of pay-to-play and moving towards the play-and-earn model. By harnessing the power of blockchain technology, the gaming industry is transforming into a crypto gaming economy.

The gaming industry had come a long way since the initial days of arcades and quarter slots when gamers paid to play. Then, a decade later came console video games, with games becoming more sophisticated and costly at the same time, which redacted many possible outcomes and new utilities.

The gaming world was highly centralised and tightly controlled by game developers and publishers. Much to the chagrin of the gamers, in-game purchases were made by fiat money and had no value beyond the purview of the game. But this was before the advent of blockchain decentralisation.

Projects like Gala games, Colizeum provides infrastructural support like decentralising the servers by running nodes and tokenising the existing games. The decentralised servers allow gamers to collaborate, compete, and play with anybody worldwide and engage in competitive Play-To-Earn Gaming. In addition, ecosystems like Gala games have enabled platforms to introduce native tokens and NFTs in online games with multiple utilities.

By using cryptocurrencies and tokens as in-game currency, gamers can make in-game purchases such as skins, avatars, extra lives, guns etc. These in-game items can be traded in the open market and converted to real money. The blockchain gaming economy can improve the gaming experience of players and provide new streams of income to players as well as online gaming platforms, which also offer actual ownership of the gaming assets to the gamers.

When talking about crypto Gaming, We should talk about the ecosystems in which the games should be built. Though crypto gaming has enabled a profitable integration for gamers and game creators where game publishers create a reward structure for gamers and are benefitted in return, we also should talk about the infrastructure and the core concepts for the games. The blockchain should support the scalability of the game, and also the transactions should happen quickly. A few of the best blockchains are discussed below.

Solana’s amazingly-fast transactions and cheap fees are the core reasons game developers build on Solana. Even though many notable games like Star Atlas, Aurory, etc., are made on Solana, these games face difficulties on Solana as the entire blockchain is still in its Beta version. The RPCs fail when overloading of the chain occurs. We all might have known the failure of Solana due to the network crunch during a game launch. These failures could affect the performance of the games and create a bad experience for the gamers.

One of the leading Ethereum killer layer 1, Avalanche network, comes up with the concept of subnets where the games are developed. A subnet on Avalanche acts like a separate platform instance designed for a specific decentralised app (Dapp) or game—almost like a white-label solution for a custom blockchain, yet still part of Avalanche. It inherits the security from Avalanche but acts as a dedicated space that isn’t affected by the more comprehensive network and shields the game’s performance even when the network is overloaded.

Binance is one of the most significant layers 1 following the Ethereum network. The smart chain has more than 200 games built on the network. Being a simple and fast network with low transaction fees, BSC is one of the preferred chains for the game developers to create the games.

All these chains have their own drawbacks, when it comes to Solana the failure of RPC is one of the major issues which disrupts the gaming experience over there. When it comes to other networks like Avalanche and Binance Smart Chain they are not developed on a future proof quantum resistance technology like Cellframe and hard to use as basement for gaming edge computing, when gamers brings up their own game servers as blockchain nodes. Adopting Cellframe technology to building gaming projects will be the solution to the drawbacks in another chain.

Celframe brings Scalability and Reliability to the existing Layer 1

As blockchain technologies continue to disrupt the gaming industry, more and more players and platforms are jumping on crypto gaming. Blockchain technology should also expand to function seamlessly when this bandwidth increases. The current ecosystem could manage to some extent; most games are built on top-tier ecosystems which tend to fail under certain conditions. Cellframe enhances the performance of the existing blockchain networks by improving the network’s scalability without compromising the chain’s security.

Cellframe builds Post-Quantum Blockchain is the next step in the blockchain gaming industry, leveraging the power of post-quantum cryptography to ensure that data is stored securely and cannot be tampered with, so they can rely on the integrity and security of their data.

The future proof technology of cellframe is the solution for the gaming projects to build on a reliable chain built so close to the hardware layer for optimisation. Moreover, as Cellframe is a layer zero protocol made with interoperability and compatibility, Cellframe blockchain will have a WASM and EVM compatible to extend for maximum possibilities. That is when the future of Gaming can own decentralised assets, play anywhere and with anyone in the world, enjoy enhanced levels of security and monetise their time and in-game expertise.

Gaming and blockchain combined will create an ecosystem that works seamlessly, making blockchain the invisible player in the background, which could create a sustainable economy out of blockchain gaming. Therefore, we firmly believe Cellframe will significantly revolutionise the Gaming industry.

As service-oriented blockchain network, Cellframe can be used as basement for gaming edge computing, when users acts like game servers as well, running their nodes. Cellframe SDK allows to builds specifical Proof-of-Game to make PvP battle trustless and cheeter-free without expensive servers and mobs of moderators. 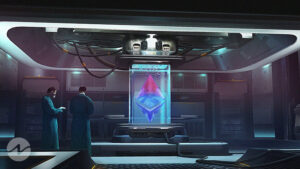 The Upcoming “Merge” Update in Ethereum Will Not Break Gasoline Charges