Despite the crypto bear market, demand is still fueling the expansion of the metaverse, as evidenced by the latest report from DappRadar, the global app store for decentralized apps.

Despite a 91.61% reduction to $90 million in trade volume for virtual worlds in the third quarter, the number of land sales only fell by 37.54% quarter over quarter, demonstrating that interest in these projects remains high. Top metaverse projects had an average 80% drop in trade volume from Q2, but only an 11% drop in sales count.

Setting the pace Season 3 of the Sandbox Alpha saw over 90 different experiences, four million wallet registrations, and over 200,000 unique users per month. As a result, the platform’s quarterly revenues increased by 190%. More than 1.12 million ENS domain names were registered in Q3, a 72% year-over-year increase from Q2. Nearly $360 million, or 33%, of the $1.2 billion brought in during the third quarter was specifically designated for metaverse infrastructure.

Synopsis of the Metaverse

Despite economic obstacles, interest in metaverse platforms remains high. Although the average sales count of the top 10 metaverse projects (excluding Axie and Upland) dropped by 11.55% in Q3, the report calls this “a bullish sign,” as it suggests that the buzz for these sorts of projects has not greatly waned. 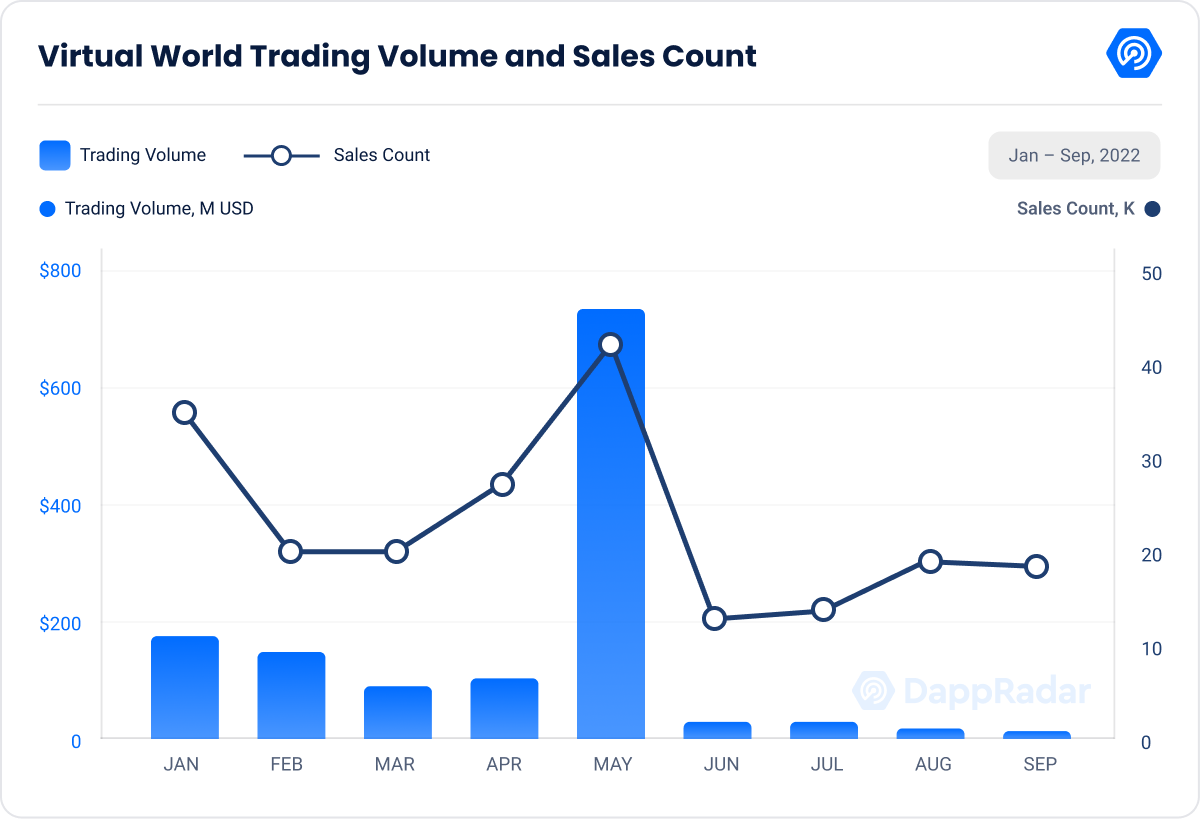 In May of 2022, following one of the biggest NFT mints, the most popular metaverse project was Otherdeed for Otherside. Nonetheless, in 2022, both The Sandbox and Decentraland remained two of the most popular metaverse platforms. Since May, an average of 750 wallets per day have been engaging with the contracts on The Sandbox’s gaming platform. On the other hand, since May, The Sandbox Marketplace’s daily UAW has increased by 348 percent, reaching 395 by September. The report did find that the average USD trade volume for the top 10 metaverse projects (not including Axie and Upland) dropped by 80% this quarter.

As a result of a number of September events, the number of people visiting Decentraland each day increased by 6,000, to 56,000, for a 6% month-over-month rise in daily active users (DAU). When combined with the daily meta-transactions and almost 800 distinct wallets that engage with Decentraland’s contracts, the blockchain activity monitored by UAW provides a bright picture of the virtual world. Almost 150 DAO proposals received over 11,000 votes in September, another promising indicator of the project’s active community. 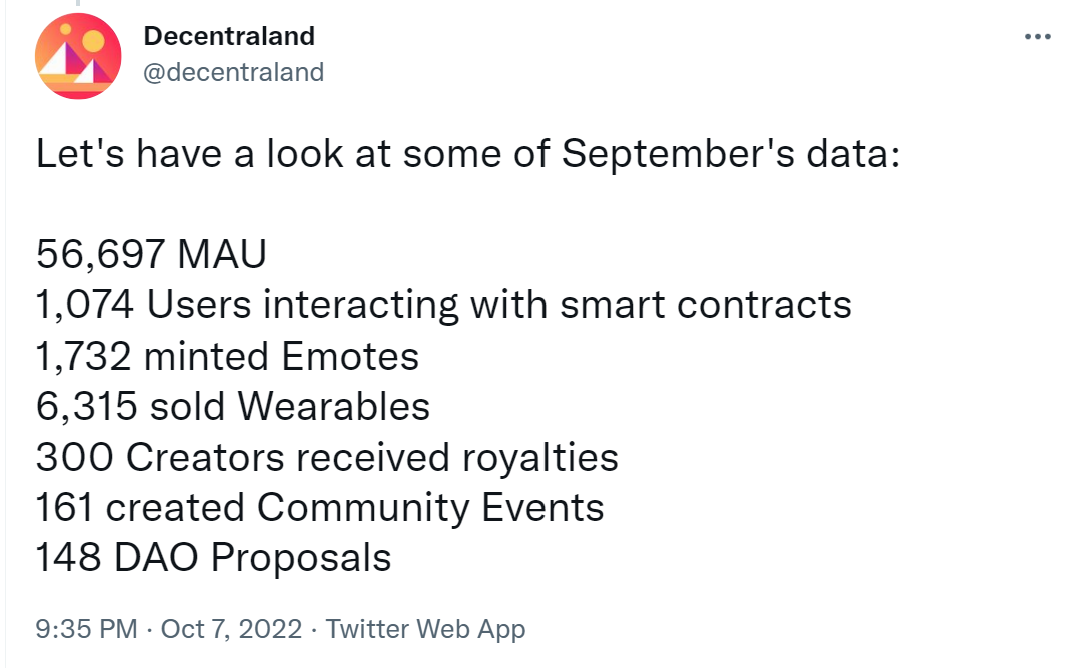 Season 3 of The Sandbox Alpha

The Sandbox Alpha Season 3 has accomplished a major milestone, with over 200,000 active monthly users. And it was reported that every day, 39,000 people enter the virtual world, with 1.6 million people accessing The Sandbox website in the last month alone. In addition, there have been almost 1.6 million hours of playtime devoted to Season 3.

Metaverse tokens have suffered with the rest of the cryptocurrency market during the crypto winter. Since May 1st, Yuga Labs’ APE token value has dropped 72.92%, to $5.44 on September 30th (with a total market cap of $1.42 billion). The Sandbox coin, SAND, is the second most valuable token in the Metaverse by market cap and performed in a similar fashion. One of the few metaverse tokens that has declined by less than 50% since May 1 is ImmutableX coin (IMX).

The number of new.eth domains registered by the ENS in September, 437,365, surpassed the previous record of 378,805 set in July. The number of registrations surged to over 2.6 million, up 72%, and income from registration and renewal fees rose to $5.5 million. Additionally, during that same month, ENS recorded 35,427 new accounts that registered or acquired at least one domain, bringing the grand total to 572,000.

Investing in the Development of the Metaverse

The adoption of the metaverse has exploded this quarter. Six growth-stage startups, including three Web3 companies, were chosen to participate in the 2022 Disney Accelerator Program. Dapper Labs has announced its partnership with the world’s leading ticketing platform after distributing 70,000 NFT tickets for Super Bowl LVI. There are several well-known companies now present in the metaverse, and Walmart is one of them. Both Walmart Land and Walmart’s Universe of Play, virtual experiences created by the US retailer, were recently released on Roblox.

The report claims the metaverse will have far-reaching effects on professional and private lives and has the potential to produce up to $5 trillion in value by 2030. Watching last week’s Meta Connect event would have made this obvious.

“The metaverse should not replace the physical world or the interpersonal bonds that unite us. It should complement what people do and permit unrestricted mobility between the two worlds in a manner that broadens rather than restricts our range of experiences. For this to occur, however, collective leadership is required to ensure that the acts done responsibly shape the course of this revolution.”